His name was Bruno and he was a nut.

If you’ve ever had the pleasure of living with a Boxer, you’ll know what I mean.  There’s something about a Boxer – their antics, their expressions, their energy – that makes them unique and just downright fun to spend time with. 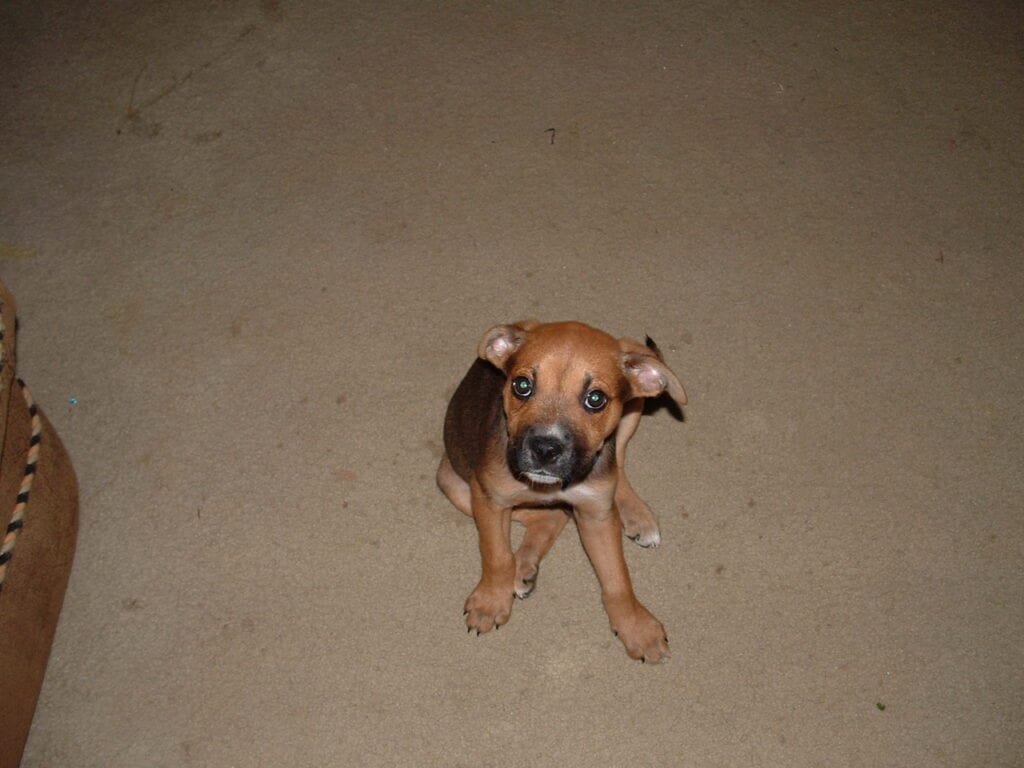 Bruno was, as you can probably guess if you’ve been reading this site much, a rescue.

My son brought him home as a very small puppy when he was maybe a few weeks old.

He was the cutest thing but, we had too many dogs so I told my son to take him back. We couldn’t keep him.

He was 12 when he died and I loved him every minute of every day we had him.

I’ve never been so glad to have my son disobey me.  I don’t remember the specifics of how he came back but I’m sure it was something along the lines of “they’re gone now, I can’t take him back” or something like that.

Whatever the case, Bruno stayed, of course.

Is a Boxer a good watchdog?

I’ve come to believe that there are two types of watchdogs.

Those that deter people from bothering you just on their looks and those that actually would do some damage should somebody break into the house.

Bruno was the former.

The sight of him would deter a burglar.

But, once in the house, I’m pretty sure Bruno would have brought the burglar a tennis ball and would have only wanted to play fetch.

Is a Boxer a good companion?

They are energetic so if you are a couch potato, they will get you off the couch to go outside and play fetch/swim/jump/frisbee/golf/whatever, and all at the same time.

Did I mention they are energetic?

When inside, Bruno was content to sit in your lap and watch TV, maybe have a bite of your hamburger and a sip of your soda.  He might prefer TV shows you weren’t watching so he’d change the channel when you weren’t looking.

Kind of like living with a perpetual 5 year old kid.

Actually, I think a 5 year old kid is a perfect comparison.

But, you know, one of those 5 year olds that are fun to be around.

The Boxer as a protector

None of us were ever in a position to need protection from Bruno so I can’t say for sure but I’m fairly certain he would have found something else to do.

There are always balls to fetch and besides, those humans are pretty good at taking care of themselves.

Boxers, to be sure, can be trained to be excellent guard dogs and protectors, there is no doubt.

I’m just saying that Bruno – untrained Bruno – was not.

When he yawned, that thing just rolled out and almost hit the floor.  Between the ridiculous tongue and his Boxer face, yes, he drooled.

Bruno was a member of the neckerchief club.

We tie bandanas loosely around the necks of our droolers to keep things clean (somewhat).

Are Boxers good with kids?

Our son was, I think, about 15 when he brought Bruno home so our daughter would have been about 9.

We also have a steady stream of family and friends through our home and Bruno was always oddly courteous and careful around the kids. You’ll hear similar stories from other Boxer owners that Boxers are very good around kids.

Usually one to jump or run or just do anything crazy at the spur of the moment, he never would when there were young kids around.

The really nice thing about Bruno, and other Boxers, is that they can easily match the kid’s energy levels.  Want to go outside and run?  Boxers will run the kids until they (the kids) drop.

Turn them all loose in the backyard and the kids will be begging for a break. Are Boxers good with other dogs?

During the time we had Bruno, we also had, at one point or another, two Dachshunds, several Pit Bulls, a Rottweiler, a Schipperke, a couple of Labradors, and one red dog that is still with us that we still don’t know what she is.

I never saw Bruno get in an actual fight and very, very seldom ever heard him growl or see his hackles rise.

When the other dogs did tussle, he would find something else to do and stayed out of it.

Bruno was a powerful dog as Boxers are. I’m glad he had this attitude where he just preferred to get along with everybody.

The only time I ever saw Bruno actually encounter trouble was when Binkie, our female lab with an attitude, decided she was mad at him for some reason and chased him around several acres, her nipping at Bruno’s butt and him trying to keep out of range.

He was fast and led her on a large circle of our property and ended up at the back door, scratching to be let in.

As with any breed, there will be some aggressive Boxers but I believe that’s the owner, not the breed.

Raise them right and there’s no reason for them to be aggressive.

Since owning Bruno, I’ve went out of my way to meet other Boxers and Boxer owners. Every person that I’ve met that I would consider a caring and affectionate dog owner that has a Boxer, the Boxer is not aggressive.

Make sure they get enough exercise (they need a lot!) and there’s no reason for aggression.

What is the average lifespan of a Boxer

Bruno made it to about 12 years which is apparently at the top end of their life expectancy.  So you’ll have around a decade to hang out with your energetic and hilarious buddy.

Bruno grew old gracefully and never got tired of the tennis balls and frisbees he found, right up to his last days.

Bruno had a few medical problems but nothing serious.  Boxers are susceptible to a number of ailments, however, so you’ll want to keep him up to date on his medical visits.

Also, know that cancer (how Bruno died) is the #1 killer of Boxers.

So are Boxers good dogs? Having a dog rescue, you end up with dogs that you would have never otherwise considered owning.

Bruno was in that category.

Until him I never really gave Boxers a second thought.  But, a decade or so later, I’d own another one in a heartbeat.

They are fantastic dogs, great friends, energetic playmates and just downright funny dogs to have around the house.

Yes, they are good dogs!

Here’s a dog that is a visual deterrent to burglars but doesn’t have a mean bone in his body, an energetic playmate for the kids, an amiable companion if you just want to sit and watch a movie, and a dog that gets along with other dogs just fine.

I would say that if you live in an area that is confined in terms of how much your Boxer could get out and run/play/romp/wiggle/tussle/jump/spin/flip/flop/fetch then you might want to reconsider.

These are dogs that love to run so the best situation is where they can do so freely and often.

We have acres of land so Bruno could run to his heart’s content, and he did, every day.

I cannot imagine Bruno without the adequate space to do this.

He may have been OK but then again I feel like that would have been depriving him of something he dearly loved.

So really, space to run and patience to put up with their crazy antics are the two main things I think you should give consideration to when considering bringing a Boxer into your life.